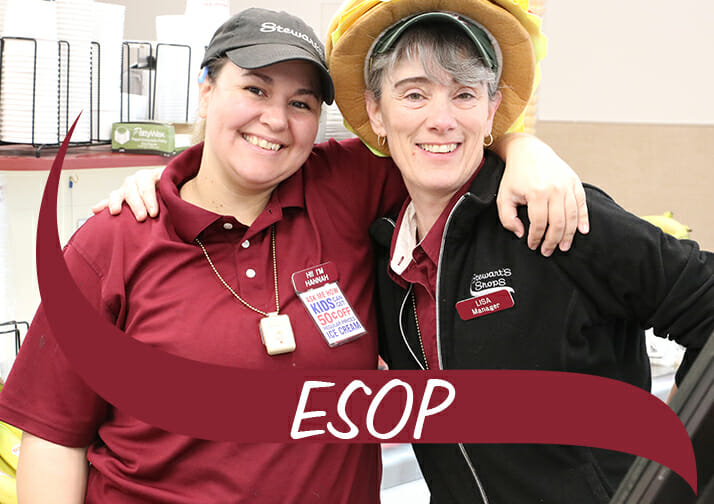 Stewart’s Shops employees have some very BIG smiles on their faces and with good reason.

They just received their statements with a company contribution of nearly 20% of their salary into their Employee Stock Ownership Plan or ESOP. This generous contribution far surpasses the average pension plan and unlike a 401k, it’s completely company paid.

And on top of that hefty contribution, they received 13% growth on their existing balance (as long they did not take any dividends).

This success is from the great service the Partners provide, increased operating profitability, and the changes in the Federal corporate tax law. The company has made a $17 million company contribution to the ESOP, an increase of $6 million over the previous year.

Stewart’s employees are called Partners, and they really are, since they own nearly 40 percent of the company through their ESOP. It is 100 percent funded by the company for anyone working at least 1000 hours a year. After six years in the plan, a Partner’s balance is usually greater than a year’s pay.

There are nearly 1,000 partners with a balance of over $100,000, and 75 Partners with a balance of over $1 million. Nearly a third of these millionaires started out as hourly employees, and over a third are still actively working versus retired. This is possible because of Stewart’s stability, enabling years of double digit percent of pay contributions, plus double-digit appreciation of balances each year.

Stewart’s youngest millionaire became a millionaire at only 46 years old. This long-term shop manager said, “Stewart’s Shops has offered me a great career. I am proud and extremely grateful to be one of the 75 millionaires. I want everyone to know, that this is real and becoming a millionaire is achievable. I would like to say thank you to the Dake Family for being so generous to their employees. It’s nice to know that I will retire comfortably and hard work really does pay off.”

Stewart’s Shops currently has positions available at its shops, plant, and corporate office. Visit the careers page for more information.