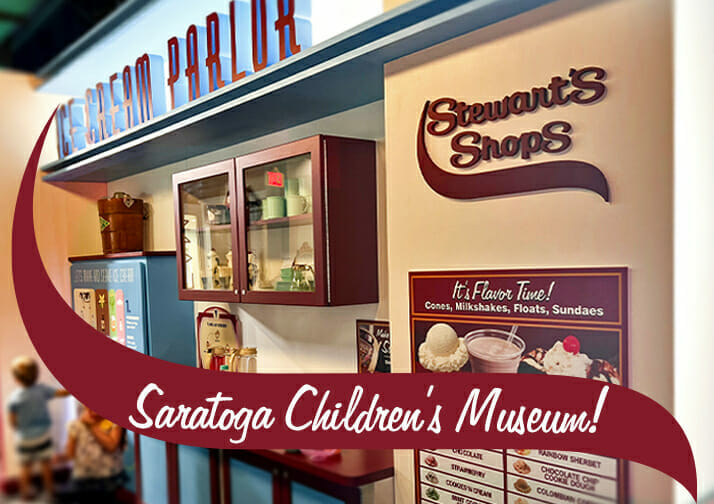 In July, the Children’s Museum opened the doors to their new location in the Lincoln Baths Building located in Saratoga Spa State Park. Their previous location on Caroline Street in Saratoga just could not support the museum’s growing needs. This new location is more than double the size of the old one! Visitors will find it more convenient, and with plenty of new exhibits.

Prior to the museum’s relocation, the Lincoln Baths had been closed to the public for years. Now they are being given new life as the home to a newly expanded Children’s Museum featuring dozens of exciting and educational exhibits for children and parents in the Saratoga Springs area.  The museum will be joining the National Museum of Dance and the Saratoga Automobile Museum in the Saratoga Spa State Park. Saratoga Spa State Park also includes Saratoga Performing Arts Center, the Spa Little Theater, the Gideon Putnam Resort, Roosevelt Baths and Spa.

Stewart’s Shops has supported the Children’s Museum for over 20 years, and we are honored to have a dedicated exhibit featuring an ice cream parlor at the museum.  The exhibit features authentic Stewart’s Shops details, including one of our iconic booths, and even an interactive Make Your Own Sundae station for the kids.

Each year the museum supports over 40,000 people on average. In 2021, the Saratoga Children’s Museum and the Children’s Museum of Science and Technology in Troy combined forces to offer even more opportunities to children in the capital region and beyond.

This new location will allow the museum to create an even more interactive community. The new location has a larger footprint and the new and old exhibits kids love. You’ll also find  interactive classroom spaces and access to the amenities of the State Park. The new museum is sure to spark imagination and nurture discovery, and Stewart’s Shops is honored to be a part of this experience.

We Are Closer to You.