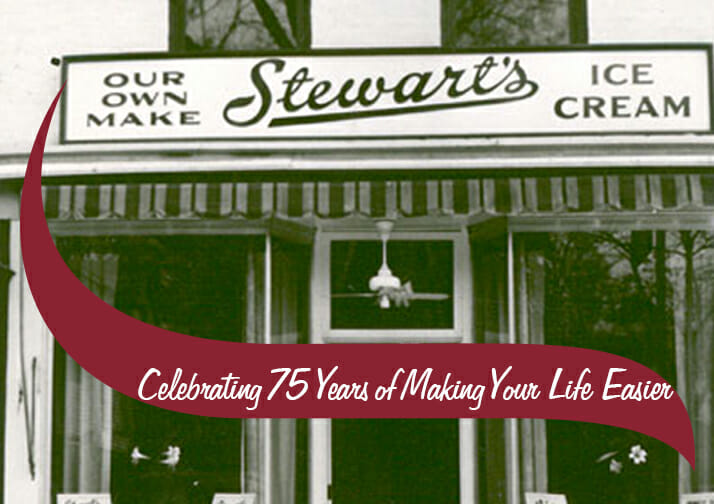 Stewart’s Shops has been evolving over the years to “Make Your Life Easier.” The 75 year evolution has taken the iconic convenience store chain from a simple ice cream shop to the neighborhood store with something for everyone. In 1945, Charles V. and Percy Dake purchased the first Stewart’s Shop with a small dairy attached on Church Avenue in Ballston Spa from Donald Stewart. Since that purchase, Stewart’s has brought both innovation and disruption with products, services and vertical integration to better serve our customers and to make their lives easier. 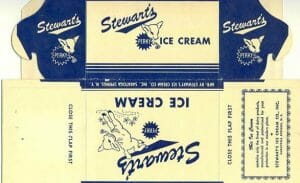 The business focus was on ice cream and benefited from a few unique advantages.  At a Stewart’s Ice Cream Shop, you could enjoy a cone, sundae, or take home packaged ice cream. Quickly expanding to a few dozen stores while still providing half gallon home delivery, Stewart’s had strong market penetration. The paper folding half gallon carton really set Stewart’s ice cream apart because it fit better in the freezer than the cylinder containers used by other brands.

In 1948, Philly Dake, wife of Charlie Dake, had the idea to let customers put their own toppings on their ice cream and Make Your Own Sundaes were born. Popularity grew when WRGB would broadcast live commercials of kids eating Stewart’s Make Your Own Sundaes during the Stewart’s Western Sundae featuring shows like Hopalong Cassidy, Hawkeye, and Whirlybirds. When the programs ended, the shops would be filled with families enjoying Make Your Own Sundaes. During this time, Stewart’s owned a helicopter and gave rides to customers who collected Perky Points from shops. When the ice cream business slowed down in the winters of Upstate New York, we added milk, bread, and snacks to our shops. But we had to overcome one problem, there was a law against selling your own milk in your own shops. Thanks to the Perky Milk Lawsuit against NYS Agriculture and Markets, Stewart’s was eventually able to sell their own milk allowing for lower priced quality milk versus home delivery. This disruption accelerated the demise of home delivery because it was a more affordable option for the consumer.

One part of the NYS Agriculture and Markets deal required Stewart’s to have contract haulers to deliver the milk to the shops. The deal was set up on an incentive basis and turned out to be a building block for the future success of the business. The more units of milk the driver delivered, the more money they made. These drivers had a vested interest in the success of the shops and became very supportive. Thus, the birth of vertical integration for Stewart’s Shops. 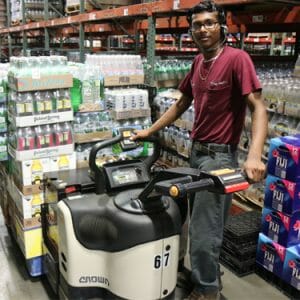 What is Vertical Integration?
Using internal resources for all manufacturing and distribution to our own shops.

Did you know? Stewart’s distributes 2/3 of all of the products we sell.

Stewart’s was also one of the first to use the paper milk carton and still use paper cartons today. Proud to support 23 local dairy farms, Stewart’s is a six time winner of the Cornell University Department of Food Science NYS BEST Milk Award taking the award again in 2020 for BEST Milk and BEST Chocolate Milk, which was a new category in 2020. Ironically enough, the owners of the Hudson shop wouldn’t let us purchase the shop without agreeing to sell gas. We agreed to the sale and entered the gas business and years later actually became one of their biggest competitors. Soon after, we began buying chains like Stop n’ Go and Normanskill Dairy to expand our gas footprint. The expansion into gas allowed for additional parking for customers to shop inside our stores.  Today we offer non-ethanol gas to over 280 Stewart’s Shops.

Our transition into gas, was not only more convenient for the customer, customers saved money too, as self-serve was less expensive. Free air was offered, and we continue to offer this service today.

As we grew the gas side of the business, we also expanded our bread, snacks and non-food items to offer additional convenience to our customers. We broke the mold when we became a gas station that sold Make Your Own Sundaes and milkshakes, but we’ve always written our own rules! 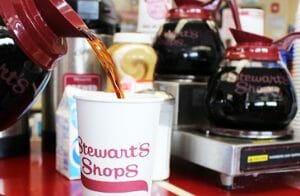 Pastries were added and Stewart’s became ‘the place’ to read the newspaper and have your morning coffee and donuts.

We made it easy for people to make their coffee the way they liked it; the Make Your Own theme gained popularity and remains a key reason that people choose Stewart’s today. 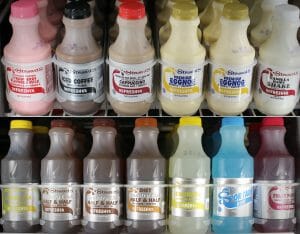 Beverage packaging was reinvented and in typical Stewart’s fashion, using vertical integration, we utilized our own blow mold machine, and the Stewart’s Refresher line was born. This line includes a variety of non-carbonated juices and teas and milk beverages.

In the 90’s everyone carried a beverage with them, Stewart’s saw the opportunity and provided ‘Over 100 Ways to Get Un-Thirsty’. To this day, our beverage sales remain strong and liquid grazing is still very prevalent. Today, Cold Brew is our best-selling Refresher.

2000’s Investing In Our Partners 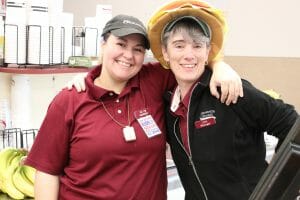 While most companies were trying to cut staff and automate, Stewart’s invested in its Partners with ESOP and systems. Employees owned over 1/3 of the company through the ESOP plans. Today, employees own over 40% of the company and there are 90 Stewart’s made millionaires.  Over 1000 Partners have an ESOP balance of over $100K. On average, we have seven ESOP members per shop. That ownership mentality encourages Partners to take pride in their work and offer premium service to our customers.

Investments in systems upgrades helped streamline processes.  We introduced a voice picking system at the distribution center to create efficiencies to make sure we are stocked with what you need.

2010s We Became Your Restaurant 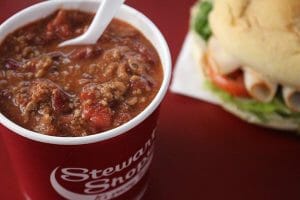 Expanding our kitchen allowed us to prepare meals for both in-shop dining and take home food options. Our iconic booths provide an easy way for a family to have a quick meal on the run. Making Your Life Easier, we provide salads, hot entrees, subs, Now & Then meals you can take and heat up at home and more. From meatballs to macaroni and cheese to manicotti and chili and even the meat sauce for our Make Your Own Hot Dogs, they’re all made in the Stewart’s Kitchen and they’re all delicious. We have a flavor for every foodie! Even our Italian customers rave about our meatballs, some have even tried to pass them off as their own at family gatherings we’ve been told. And rumor has it, our chili is the best chili north of Texas.

Some of our shops are located in isolated areas and can be up to 30 miles from the nearest grocery store and others are in cities where many residents don’t own their own car to travel to a grocery store. In these cases, we’re the town grocery store and fill that grocery need with fresh produce and expanded grocery items. Customers often share their surprise at how much we offer. Cereal, frozen chicken, pet food, detergent, paper products and fresh produce including green peppers, tomatoes, onions, potatoes, lettuce, apples, limes, lemons are just some items we offer in every shop. 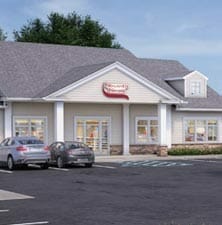 With this series of innovations, Stewart’s is in a unique position to maintain profitability and stability to make investments and grow. We have invested over $150 million in shop construction over the past three years. With no signs of slowing down, we have 19 new shops planned in 2020 and a 60,000 sq. foot addition to our warehouse/distribution plant to be completed in 2021. The warehouse expansion will further enhance the vertical integration that has made Stewart’s what it is today. 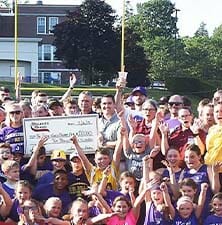 Stewart’s believes in giving back to the communities they serve and together with the Dake Family provide over $7.5 million to nonprofits each year, with $1m in COVID relief to nonprofits this year. Our Holiday Match program has benefited thousands of nonprofit organizations for the past 30 years with over $30 million in relief.

Today, Stewart’s employs over 5,000 Partners with 340 locations in 31 counties across upstate New York and Southern Vermont.

Making Your Life Easier for the Past 75 Years!