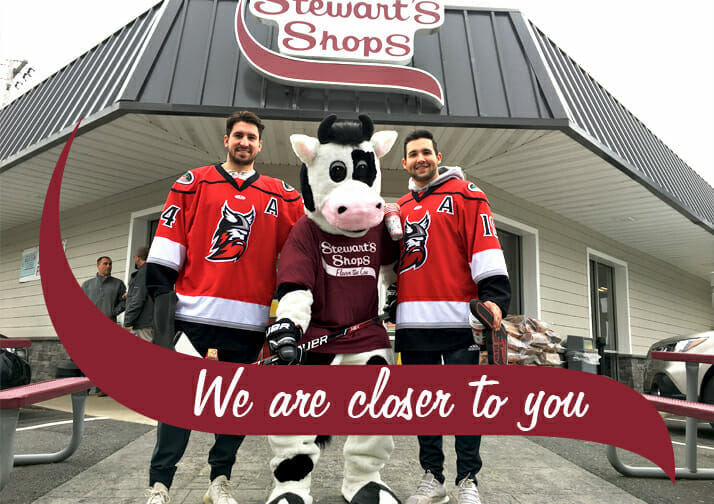 Stewart’s Shops is partnering with the Adirondack Thunder this season to provide ticket vouchers for any home game. Now you get all your essentials at Stewart’s and plan a night out with family or friends watching  great hockey!

About the Deal
This hat trick of a deal includes, a ticket for the game, a popcorn and a soda for only $20.  The vouchers are now available at participating Stewart’s Shops in Saratoga, Warren and Washington counties. The home opener is Saturday, October 23rd and vouchers are on sale now through the entire season.

The voucher gets you a seat in the Silver Section which has seats all around the arena allowing you to see the game from any angle you want. This year the Thunder will be playing home games at 100% capacity so make sure you hurry in for your tickets! Seating with a voucher is first come first serve.

About the Team
The Adirondack Thunder is the only professional hockey team in the Capital Region. They are a minor league affiliate of the New Jersey Devils in the ECHL. The NHL stars of tomorrow play for the Thunder and in the ECHL. Many of these players will advance to the American Hockey League and then on to the National Hockey League. It is very possible for you to see a future player for the New Jersey Devils when you attend an Adirondack Thunder home game or see future stars for other NHL squads whose ECHL teams play the Thunder.