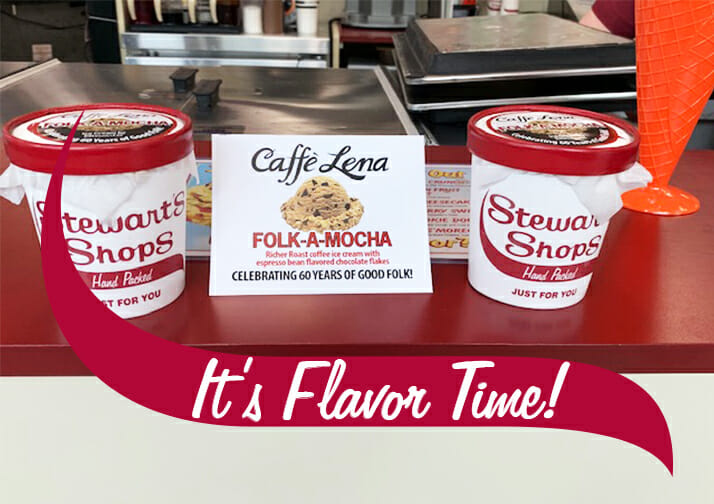 Caffè Lena is the oldest folk-oriented coffee house in the United States. Founded in 1960, this small intimate musical venue has welcomed greats like Bob Dylan, Arlo Guthrie and most recently Sawyer Fredericks. This world famous acoustic music venue features folk, blues, traditional and jazz, as well as storytelling, poetry and theater. This quaint coffee house is nestled on Phila Street in the heart of Saratoga Springs, NY. Bill and Lena Spencer founded Caffè Lena 60 years ago to showcase musical and artistic talent.

Bringing Ice Cream and Music Together
To celebrate 60 years of live music, Caffè Lena approached us and requested a Stewart’s dedicated ice cream flavor in their honor. How could we say no? We jumped at the opportunity to celebrate such a local treasure. They selected the flavor Brew-Ha-Ha. Fitting for this historical coffee house, this serendipitous choice features richer roast coffee ice cream brewing with espresso bean flavored chocolate flakes.

Choosing the Name
Caffè Lena launched a social media contest to name the ice cream, and the winning name was chosen. Eric Rosenberg came up with the winning name, Folk-a-Mocha; he was presented with a Stewart’s gift card.

Celebrating 60 Years: Event Details
Caffè Lena celebrated its 60th anniversary on Thursday, May 21st with a two-part event. During the day. Bonacio Construction’s flatbed trucks rolled around town with bands playing music on the back. In the evening there was a live stream special featuring stories, songs and photos from the Caffè Lena community.

Three bands rode around downtown Saratoga Springs in the back of the trucks: Hot Club of Saratoga, Garland Nelson, and Let’s Be Leonard.

Concert viewers are encouraged to head to the cone counter at any Stewart’s Shop in the city of Saratoga Springs to get their very own hand packed pint or ice cream cone of Folk-a-Mocha. Because what pairs better than good music and ice cream, especially in these times!