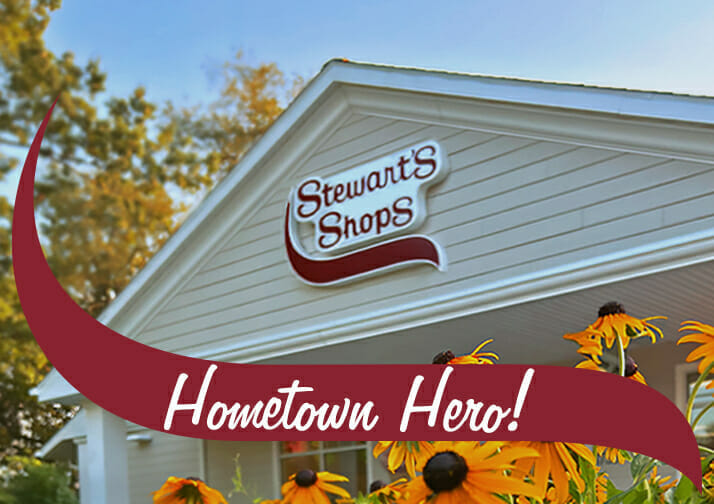 Autoevolution.com posted an article about us. We thought it was so good, our readers should see it too.

Stewarts Shops: A Delightful Gas Station Chain with an Ice Cream Parlor in Every Location
by Benny Kirk

Of course, we’ve discussed Sheetz and Wawa before, two of the more famous gas station restaurants native to Pennsylvania, New Jersey, and a few other places. But one chain that flies under with uncanny stealth is one that only a select part of the country gets to enjoy, the fine folks of Western, Central, and Mid-Hudson New York, and a few in Southwestern Vermont.

This, dear friends, is Stewart’s Shops. The only gas station we’re aware of with a full ice cream parlor, pizza oven, and deli sandwich station all in one place. A place with ample gas and diesel pumps, free compressed air for your tires, and a way above-average convenience store inside that makes a 7-eleven feel cold and alien.

It’s also a privately owned, family-run affair. You know, the ones Americans are often convinced can’t exist anymore. Well, folks, here’s proof positive that notion is a load of bull-you-know-what. Because this is a car-oriented website, we ought to cover that side of Stewart’s Shop’s operation first. As many as three-quarters of all locations sell gasoline as their main commodity.

Only a small handful still operate as convenience stores only. In 2020, the company struck a deal to buy the local Polsinello Fuels distributor with the intention of bringing gasoline from industry leaders, including Sunoco, Citgo, and Mobil.

As mentioned, compressed air is offered at nearly all locations at no charge, and no need to make a prior purchase. Not at all a guarantee at American gas stations. Some can charge as much as $2 or $3 to use their air compressors. Most locations offer at least one or two diesel pumps alongside their newly acquired top-tier gasoline.

You’ll find a whole section worth of automotive-related motor oil, fluids, jerry cans, electric car gadgets and chargers at most any Stewart’s Shops location you may find yourself inside. Now that we’ve covered the obligatory automotive mumbo-jumbo, let’s take a look at what makes Stewart’s Shops so unique. That would, of course, be their ice cream, pizza, beverages, and sandwiches.

The ice cream side of Stewart’s Shop’s operation originates in the late 1910s when Percy and Charles V. Dake, the first generation of the Dake family business, bought their family dairy farm in Middle Grove, New York, in 1917. By the 1920s, the pair were selling their top-quality dairy as far south as Baltimore.

It was only a matter of time before some of that got turned into ice cream, and having access to some of the finest dairy milk available anywhere in America could only make it delicious. Think Baskin Robin’s 31 flavors are outrageous? Well, Stewart’s Shops could give them a run for their money. Our personal recommendation is the Black Raspberry flavor, it’ll make your taste buds do the cha-cha slide.

The brand is also famous for its flavored dairy drinks, and locals seem to love the seasonal mint-flavored milk, among others. All alongside the Coca-Cola, Pepsi, and various energy drinks all American gas stations must stock. But they also have their own line of soft beverages, juices, iced tea, eggs, potato chips, and of course, every kind of milk you could think of.

Most locations have limited sit-down eating space if you’d like to savor your meal before hitting the road. Add in the surprisingly tasty lunch sandwiches, fresh coffee, and premade egg sandwiches for breakfast that the company estimates sold as many as four million in 2021, and it’s a recipe for an American success story.

More specifically, it’s a recipe for becoming a hometown hero for New Yorkers outside the clutches of New York City. They also have a wonderful relationship with their hometown community in a way that’s almost impossible to achieve in America in 2022.

Evidently, the American tradition of the successful mom-and-pop shop isn’t dead quite yet.