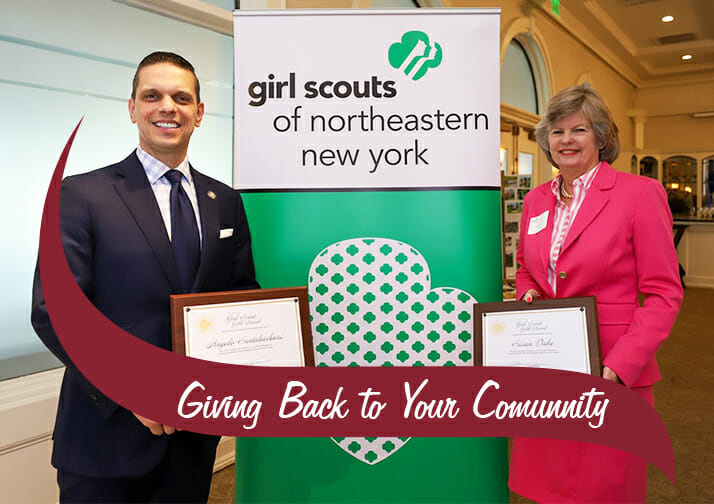 Susan Dake was a Girl Scout and she is the queen of philanthropy. These two worlds collided during the Girl Scout Silver and Gold Award Ceremony held on May 19th.

During this special award ceremony, 8 girls were honored with the highest award in Girl Scouts, the Gold Award.

Since 1916, the best and brightest Girl Scouts have undertaken projects to improve their communities—and the world. Directed at high school level Girl Scouts, only 5.4% of eligible Girl Scouts successfully earn their Gold Award. The program requires that the projects undertaken meet the following:

• Make a lasting difference in the local community, region, or beyond
• Put the Girl Scout Promise and Law into action
• Includes provisions to ensure sustainability
• Inspires others

In addition, 85 girls were given a Silver Award in recognition of their commitment, effort, and passion.

Congratulations to all of these young women. They are courageous leaders and visionary change makers.

Susan Dake, President of the Stewart’s Foundation, was given an Honorary Gold Award at the ceremony.

In 2016, the 100th Anniversary of the Gold Award, Girl Scouts of Northeastern New York introduced the Honorary Gold Award to be given to two community leaders who had achieved, either through their careers or personal endeavors, the same principles that Girls earning the Gold Award must achieve. The award acknowledges the life-long commitment of the Girl Scout mission to make the world a better place.

This year, Stewart’s Shops and related family foundations will donate an impressive $7.5 million to local charities. Dake oversees the allocation of these funds to hundreds of nonprofit organizations in the communities in which Stewart’s Shops are located. She also founded the Holiday Match Program in which Stewart’s matches all customer donations made in shops between Thanksgiving and Christmas. In 2018, the program set a new record: $2 million for children’s organizations.