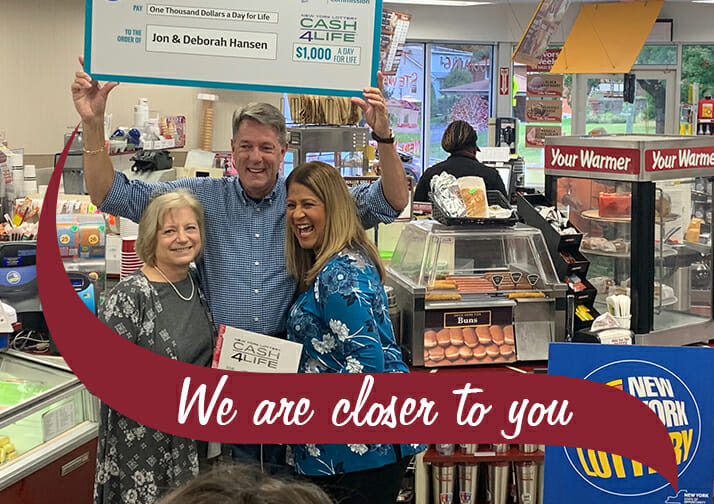 Jon and Deborah Hansen of Walden, NY are the most recent winners of the $7,000,000 CASH4LIFE jackpot prize. They matched all six numbers drawn for the September 12 drawing. Jon summed up the feeling of winning the Lottery in one word. “Surreal.”

It was an ordinary day just like any other, Jon had just arrived home after work, he walked in the door and his wife, Deborah told him that they needed milk as he walked in the door.  So naturally, Jon went to Stewart’s (his shop in Walden) to pick up milk, Stewart’s is the only place that his family gets milk. He had a few extra dollars in his pocket, so he got one quick-pick for CASH4LIFE.

Jon always plays CASH4LIFE; it’s the only game he plays. He put the ticket on the refrigerator after he bought it.

A few days later, Deborah was on Facebook and a local police officer had posted that someone in Walden had won the jackpot on CASH4LIFE. She went home and checked her numbers and thought it was a joke. She thought to herself, how does he know my numbers? She went online and confirmed the numbers and was in shock. She immediately called her husband and told him. When he came home, she was screaming in the driveway, “We won, we won!”

Upon realizing their good fortune he put the ticket away for safe keeping. “I put the ticket in a safe deposit box for safety,” he explained.”  The winning CASH4LIFE numbers for the September 12 drawing were 10-15-35-42-54 Cash Ball 03.

The Hansen’s opted to split their one-time lump sum payment and will each receive a net check totaling $2,351,300 after required withholdings. “We’ll use the winnings to travel and enjoy it with our family,” he explained.

The winning ticket was purchased at the Stewart’s Shop on East Main Street in Walden.

Could you be the next lucky winner?

Try your luck at your local Stewart’s Shop!