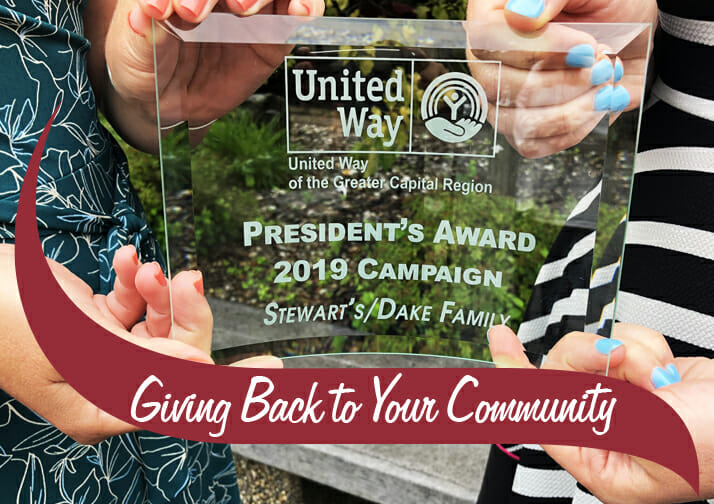 Recently, Stewart’s Shops/The Dake Family had the honor of being awarded the President’s Award by the United Way of the Greater Capital Region! This award is given to a company that is a steadfast in the community, a company that steps in to serve those in need time and time again.

According to Roslyn Cardish, the United Way’s Director of Strategic Engagement & Partnerships, Stewart’s was chosen as its recipient due to our “strong passion for our community, and the way Stewart’s and the Dake Family seek opportunities that impact the greater good.” At Stewart’s Shops, we have always worked to support our communities wherever possible, which is something the United Way does as well. We are honored to receive this recognition by such an impactful community partner!

Stewart’s Shops/The Dake Family are proud, long-standing, supporters of the United Way of the Greater Capital Region. We generously provide annual financial contributions in order to support their mission of advancing the common good in the Greater Capital Region. United Way is able to do this by investing in the building blocks for a good life. They help community members meet basic needs, provide opportunities in education that lead to a stable income and financial security, and provide resources to gain and maintain good health. Check out some photos below of the United Way attending a few events related to their initiatives:

Click here for more information on the United Way!

Stewart’s gives $7.5 annually to over 6,000 non-profit organizations. $5 million of it comes from the Dake Family Foundations, so it does not impact our Partners ESOP/Profit sharing.