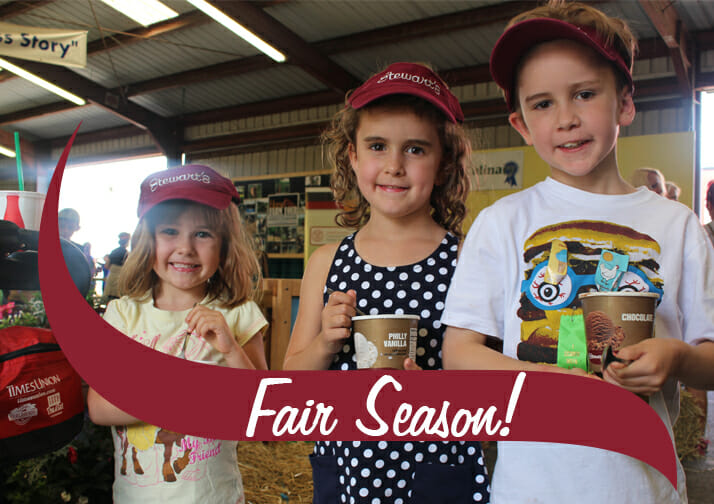 The Saratoga County Fair features some of Stewart’s milk producers providing that fresh and local milk that you know and love!

The fair was canceled in 2020 for the first time since the Civil War. Instead, a virtual fair was held. In 2021, the fair returned in a limited capacity, only opening for four days instead of the traditional six days. According to the fair website, admission this year will be $15 for general admission, $10 for veterans, $50 for a season ticket, and free for children under 12 and active military. Fair rides cost extra, with $25 for an all-day pass.

This year we are bringing back one of our favorite events, our infamous ice cream eating contest. Each participant races to finish a pint of vanilla ice cream as quick as possible.

The winner gets a sweet prize, a year’s worth of ice cream and of course, bragging rights! Think you have what it takes? Look out for the signs at the fair and sign up. Not everyone who signs up get to participate, so get there early.

You better start practicing now. Swing by your local Stewart’s Shop and grab a pint. The more you practice, the better you’ll be! The last time we held the contest our winner finished an entire pint in under a minute.

At Stewart’s Shops, we MOO for you. Our award-winning ice cream is made possible from our award-winning milk that is picked up daily from local dairy farms. We work with 20 dairy farms in Washington, Saratoga, and Rensselaer counties.